Today, many people remember Elizabeth Barrett Browning (hereafter, EBB) primarily for her collection Sonnets from the Portuguese (1850). But in addition to this romantic sequence composed for Robert Browning, EBB wrote a wide variety of poems that responded to a range of social, religious, and political issues. Perhaps the most controversial of her politically engaged compositions is “A Curse for a Nation.”

This lyric poem begins with a prologue in which the speaker recounts a dream vision about an encounter with an angel who summons her to write a curse pronounced against an offending (and unnamed) nation. The speaker initially protests, but she concedes after the angel challenges her understanding of what it means to curse. She then issues the curse as a powerful combination of warning and promise—a moral awakening that implicates the speaker and ultimately reaches toward readers as well. What is most striking to me about this poem’s religious and political rhetoric is its adaptation of the prophetic voice. Rather than rebuke a single “chosen people,” the poem uses the framework of prophecy to advance a pluralistic understanding of social justice, one that redefines conventional ideas about both cursing and nationhood.

The poem’s international scope is immediately apparent in its publication history, but I suggest that this work of redefinition invites close attention to its linguistic and structural patterns. “A Curse for a Nation” first appeared in the 1856 issue of the Boston abolitionist The Liberty Bell, a context that made the poem’s anti-slavery message apparent: the nation in question is clearly the United States of America. However, a few years later, EBB republished this poem in Poems before Congress (London: Chapman and Hall, 1860), a volume that focused on the struggle for Italian unification and independence known as the Risorgimento (Italian for “resurgence” or “rebirth”). In this context, many of EBB’s initial British reviewers interpreted the poem as a malediction against England for its failure to aid the Italian cause. EBB protested that this reading was a misinterpretation, yet “A Curse for a Nation” aligns in notable ways with the cosmopolitanism advanced elsewhere in Poems before Congress by this expatriate poetess, who lived primarily in Florence from 1847 until her death in 1861.

As signalled by the two indefinite articles in the poem’s title, “A Curse for a Nation” is ambiguous—but productively so. Through the conversation that unfolds between the angel and the speaker, the poem progressively redefines what a curse is, how it is delivered, and who may utter it. Like many other nineteenth-century writers, such as Thomas Carlyle and Matthew Arnold, EBB uses prophetic discourse for the purpose of social critique. Even so, EBB is unlike many of her contemporaries because she portrays this divine revelation not as a static denunciation but as a transformative dialogue. Whereas Carlyle takes up the prophetic voice to call attention to “the condition of England” question in Past and Present (1843), EBB addresses what might be better termed “the condition of humanity” as she calls her readers to take up their ethical obligations to a worldwide community. The poem’s performative language compels us to wrestle with challenging issues of identity, authority, and citizenship.

If your syllabus looks anything like mine, at least once a semester you’re dusting off your Tennyson and Browning skills and teaching the dramatic monologue. My personal favourites to teach are “My Last Duchess” and “Porphyria’s Lover” (Day One) and then “Tithonous,” “Ulysses,” and “St Simeon Stylites” (Day Two).

This semester I decided to do something a little different. I have the privilege of teaching my Victorian literature class in one of the fancy new classrooms at the Taylor Institute for Teaching and Learning at the University of Calgary. My 40-person class has six big touch screens, and as a result we’ve been able to do a lot of hands-on work in small groups leading into discussions with the whole class.

In the past, on Day One I’ve introduced the dramatic monologue in terms of Robert Langbaum’s classic argument that we both judge and sympathize with the speaker. (The Duke is so evil! But so compelling!). Then, on Day Two, I introduce Cornelia Pearsall’s idea that the speakers of the dramatic monologue may not be bumbling fools, but might be well aware of the aims of their own rhetoric. (What if St Simeon is in on the joke that you can’t ask to be made a saint, especially by whining about the 30 years you’ve already spent atop that pillar).

This semester, in introduced a new component. We used Prism, a tool developed by graduate students in the Praxis Program at UVa that allows classes to crowdsource interpretations of a text. Students highlight portions of a text as falling into one to three categories (or facets) designated by the instructor. Then, Prism collates all of the highlights to see how most people categorized each portion of the text, which should lead to further discussion.

Prism works really well when you want students to highlight for two or three specific concepts, which is exactly what I wanted for my lesson plan on the dramatic monologue.

On day one, I asked students to highlight passages in Browning where they felt sympathy or judgment for the speaker. Starting with textual annotation and close reading actually led to a much more balanced discussion than I’ve had in the past when I’ve posed the question of whether we sympathize or judge Browning’s speakers. (I don’t think many students have outright sympathized with the Duke since the 1950s when Langbaum wrote his study.)

We then did two short mock trials, in which the Duke and Porphyria’s Lover stood accused of murder. One group stood as jury, and other groups were assigned the defense and the prosecution. It seems a little silly, but it was really fun, and all the same points came out that would have in a lecture or discussion. (Thanks to my colleague Anthony Camara for the mock trial idea!)

On day two, we used Prism again to highlight Tennyson, this time for sympathy, judgment, and comedy (shorthand for self-aware, motivated rhetoric), following Pearsall’s argument. Each group worked on a different dramatic monologue and was responsible for presenting their findings to the class. The groups also read portions of their assigned monologue aloud two different ways: as if the speaker is giving away more than he realizes (Langbaum) and as if he is in on the joke (Pearsall). Reading the dramatic monologues aloud helped a lot.

Many more students have decided to write on the dramatic monologue for their final paper than has been the case in the past, so I think this was a successful lesson. We’ll see tomorrow, when we tackle “Locksley Hall.” Am I the only one who has vivid memories of being an undergraduate and not understanding at all what was going on in that poem?

In our discussion about her research on deafness and Victorian letters, Legier told us how Amy Levy‘s deafness is often neglected in scholarship on Levy. In the video below, Dr. Legier discusses how Levy’s poetry effectively expressed the experience of deafness through language, particularly in constructing and reconstructing identity as Levy’s hearing loss became more significant. 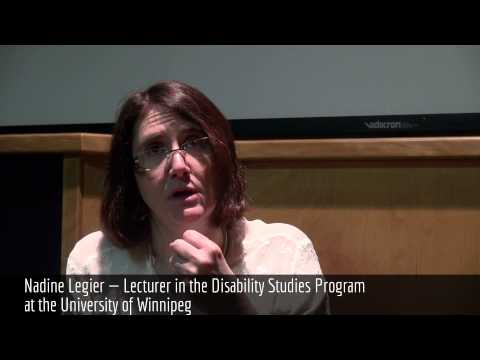 Touching on the intersection of disability studies and disability activism, Legier suggests that teaching as a person with disability is a type of activism itself—both in demonstrating the presence of disability in academia and in participating in projects working towards accessibility in the university setting, such as the Liberated Learning Project at St. Mary’s University in Halifax, where Legier lectured in the past. 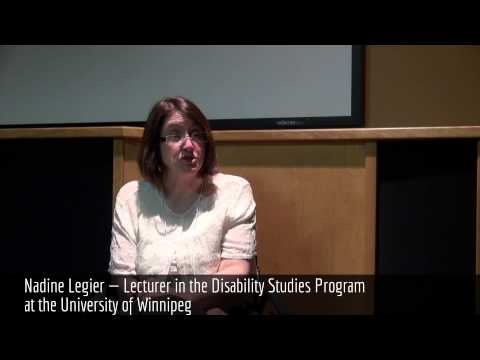